After sustained use, car keys can start to get intermittent in their remote performance. This post explains how to replace the cover and switches on the PCB, allowing it performance to be restored to when it was new.

Before starting you will need to the following items:

Note: You should only undertake this work if you are competent with a soldering iron; if you are not, a number of suppliers including the one listed above will do the job for you for a reasonable price!

Next step is to remove the printed circuit assembly (PCA) from the surrounding key fob, see pictures below of how to do that, including removing the battery.

This part is straightforward, but does require a delicate touch and a fine tipped soldering iron as described earlier.

The following picture below shows the three original buttons on the board and the wear on them can be seen, with the top of the buttons already showing a flattened look and the internal rubber from the switches spilling out onto the board. 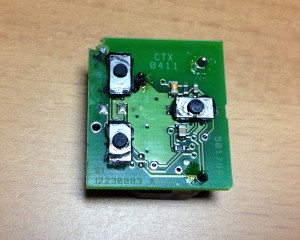 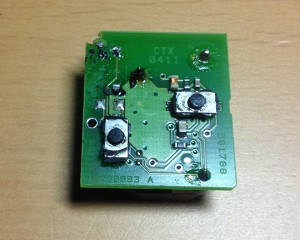 Repeat this for all three switches if needed and then clean off any residue left on the board.

The final picture below shows the new switches added to the board; these are not quite as straight as I would have liked them to be but are working well. The way I fitted these was to apply a little solder to each of the pads that the switch is going on to, then hold the switch in place with fine nosed pliers while melting the solder on each end in turn. 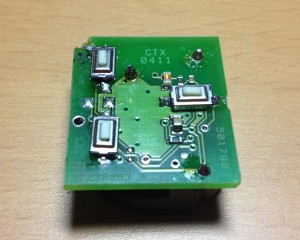 Once completed, fit the new battery supplied with the kit.

Putting the key back together is a case of following the dismantling instructions, but using the new key fob supplied. The pictures below show the process.

Resetting the key fob in your car

As you have removed power from the key, it will need to be reset with your car system. Note that this means if the car is locked, you can open the car with this key but it will set the alarm off until the key is placed in the ignition.

Once you are in the car, the way to reset the key fob is to place it into the ignition, turn to the final stage before the engine turn. press and hold the door lock button on the key, doors will lock and unlock, then remove key from ignition.

Feature image is courtesy of Jillian under a creative commons licence, original can be seen here. The version used here has been cropped.

Below you will find some recent posts from blogs that I find interesting, I hope you enjoy them too!